The End of an Era – Badger & Son Closes The Shop 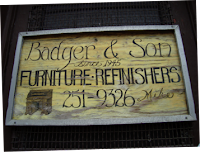 We recently received official word from Mike Westner (a.k.a. Poppa Badger) that the Badger & Son Toronto location will be closing it’s doors at the end of October, 2010.
This family owned and operated business has been with us for over 65 years and the end of an era is upon our family.  Everyone from Gramma G., Mhairi, Patty and her daughters (Jody & Stacey), including cousins Russell and Paul, and good friends like Marty, Eric and Nick; have all spent time sanding, on customer calls and performing other duties for Badger & Son.

Wood working & finishing was the Badger family’s specialty and we at Badger Paddles (the great grand daughter of Sidney & her husband, Mike) are proud to carry on the name, including Great Grampa Sidney Badger’s oil recipe, for future generations.   Mike and Fiona would like to especially thank Poppa Badger for teaching them the secrets and skills of the professionals.  Especially how important it is to use old fashioned methods and to do it by hand.  It may be the end of Toronto’s Badger & Son era, but not the end of Badger.

And so, we dedicate this blog posting to you, Poppa, and all your incredible years of hard work, artistry & your talented “eye for colour”.  Many people will miss your professionalism, generosity and your amiable character as has come to be known at The Shop, but we look forward to your retirement in the north and sharing the many adventures and challenges to come.  BEST OF EVERYTHING, POPPA BADGER, AND HAPPY PADDLING!!!!

BADGER & SON: A HISTORY
Like many great Canadian stories, this one began over seas.

It started in England with young love and a girl, Marian, who gave up her family Taylor Safe fortune to marry an artist by the name of Henry Badger. Without the consent of the Taylor family, they were married and the Badgers settled in to a sub district of London by the name of Edmonton. Married life was bliss and they had children, one of whom was a son, in 1893, naming him Sidney. To make a living for his family, Henry Badger was a talented painter who created frescos on the ceilings of London area churches. Sadly, his work was to be the death of him when one day he became a victim of a horrible accident and fell from a scaffolding in the church where he was working.


BADGER
Not long before the passing of his father, Sidney, upon the young age of 14, ventured to Canada with his brother Bill. They landed and made their way to Galt (known today as Cambridge, Ontario) where upon arrival were greeted with signs reading “ENGLISH NEED NOT APPLY” posted by the local businesses. They eventually ventured on to Toronto with hopes for better prospects. Since Sidney had apprenticed as a wood refinisher in England, stripping and refinishing the wooden store fronts and doors, he looked for for work where his talents lay.

A decade passed before Sidney found true love, like his parent’s, and married Jennie McCarter in Toronto in June of 1920. Settling along the Lakeshore in New Toronto, Sidney and Jennie made a home together and filled it with four beautiful children, Doe, Glady, Don and Gord. Sidney temporarily moved his family to Bathurst Street in the 20’s to be closer to his customers and work with RCA and Yollies. But they soon moved back the the house that Sidney built at #8 First Street in New Toronto (a house that is still there today). This was during very hard times, as the Great Depression of the 1930’s was the harsh economic climate of their day, but Sidney was a very hard worker and had artistic talents. He was able to feed his family and keep a roof over their heads by working as a “touch-up artist”.

Sidney was a gentle, soft spoken man who carried around his little black box of oil paints and lacquers everywhere he went. He would take this little black box with him on calls for RCA Radios. As radios were the only means of electronic media available, they were prized possessions for families during this time period. It was Sidney’s job to ensure that these elaborate wooden radio cabinets looked as beautiful as was intended. He would ride the streetcar around Toronto touching up radio cabinet knicks, scratches and the like. He was such an excellent touch up artist that he was offered employment with Yollies Furniture in Toronto fixing the marks on furniture as needed. He was able to make a living with these talents never having to apply for “Relief” as so many families were forced to turn to government help during the Great Depression. While Badger longed to used his talents and wood refinishing experience on furniture, World War 2 put his dreams on hold.


When his son, Don, returned home from his Naval service where he was stationed in Canada for the duration of World War 2, it wasn’t long before Sidney and his son had a business started. The first Badger & Son Furniture Refinishers shop was located in a friends garage in Parkdale in 1945. When business became too big for their friend’s space, they moved to a new location in New Toronto – just behind the old post office at Seventh Street and Lakeshore Blvd. Unfortunately the premises were located on the second floor of the building which made extra work when moving the furniture in and out of the shop for refinishing. A third and final move came not long after and Badger & Son took up residence at the rear of 3513 Lakeshore Blvd. W, where it can still be found today as owned and operated by Mike, Sidney’s grandson.


Although Badger was a very talented furniture refinisher, he loved his painting and the outdoors and frequently escaped to his cottage, Circle B in Woodland Beach, Ontario on Georgian Bay. It is here that Badger enjoyed his wife Jennie, his children, his grandchildren and the great outdoors. On friday evenings he would have his grandson  drive him to the Circle B cottage, always stopping for chicken or a burger at the Highview Restaurant on Hwy 9 on the way. This road trip was never made without the raisin pie for desert. It was Badger’s favourite and he soon influenced his family to feel the same. 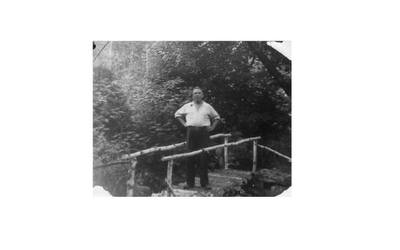 When he wasn’t at the cottage or working at Badger & Son, Sidney could be found in his basement workshop painting outdoor and wildlife scenes with the oils from his little black box. He also loved his cigars and could roll his own cigarettes. Unfortunately he died in 1964 of complications from Emphysema but not before passing the business on to his son, Don and leaving a lasting impression of the love of the Canadian wilderness on his family and grandson Mike.

AND SON
Don was born in 1924 and was the oldest brother of the four children. He and his brother Gord frequently helped his father, Sidney, but they still young and carefree. Life wasn’t too serious for Don Badger until he and some friends decided to join the Navy together. Like many youth in his day, he wanted to do his part to help win world war 2. Although Don may have thought his luck ran out, as they were called for duty the next day. However, it certainly became apparent that lady luck was still on this Badger’s side as Don was not destined to see any real action during the war. He was stationed in Belle Isle, Newfoundland and was ordered to defend the Canadian Coast. Thankfully he stayed safe during this terrible time period in our history and returned home to his family at the end of the war.


After returning from Belle Isle, Don was unsure of what future he saw for himself. That is when his father shared his dream with Don of his own wood refinishing business. After Badger & Son Furniture Refinishers was started in 1945, Don quickly took to the trade. He never married or had children but loved to travel to different places with his sisters and friends. Choosing the life of a bachelor, Don eventually resided on Badger & Son premises in a small apartment off the back of the office. Don later retired to Circle B, the family cottage in Woodland Beach on Georgian Bay. He later died of heart failure but not before living a full and happy life. During his time as the owner and operator, Don was able to teach the trade and fine art of furniture refinishing and hand stripping to his young nephew Mike.

BADGER TODAY
Mike took over the family business when Don Badger left the trade in 1987. As it turns out, Mike inherited his Grandfather Sidney’s keen eye for colour and talent as a “touch up artist” as well as a love for the Canadian wilderness. 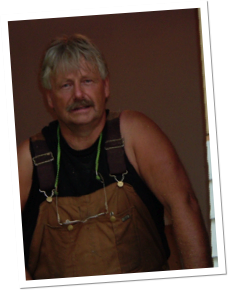 Mike, an avid outdoorsman like his grandfather, has lived the life of a weekend/summer fisherman and avid canoeist while keeping the family business for over 20 years. Mike’s only child and daughter, Fiona, also inherited the artistic gene and Mike encouraged her art as well as her love of paddling. So much so, that he provided a space for her at The Shop, and for a few years, Fiona had a small studio at Badger & Son, where she painted wilderness scenes on canoe paddles. He also finished Fiona’s paddles for her to sell. In return, and she helped her dad with Badger & Son as needed.

In the spring of 2009, Mike once again decided to bring paddles back to Badger & Son by developing a new series of paddles with his daughter and son-in-law, fittingly named BADGER PADDLES. These hand crafted wooden canoe paddles are made “for those who dig the water”. For more information about Badger’s Wooden Canoe Paddles please visit our website here BADGER PADDLES


Mike, even though he did not carry the Badger surname, maintained the business as Badger & Son (in honour of his grandfather and uncle) and Badger & Son continues to be a successful business to present day. Mike has undoubtedly made his family proud with his high level of expertise and knowledge of this old and disappearing profession. Mike still uses the same stripping method that his grandfather (and founder of Badger & Son) used. Everything is still stripped by Hand. No Dip Tanks. The proven hand method Badger & Son uses is much easier on the glue joints of the furniture and is especially recommended for delicate or fine antiques.


Thankfully Mike teaches the craft of wood finishing/furniture refinishing through the Continuing Education program with the Toronto District School Board and it has become a very popular and cherished class by his students. He has been featured in the local papers a few times over the years but he says his own personal recognition of success is just being able to admire the beauty of the wood brought back to life after refinishing it. Each piece is a source of pride. Nothing matches the depth and beauty of wood, especially when finished by Badger & Son – the old fashioned way.

SPECIAL THANKS TO GRAMMA “G” AND MIKE W. (POPPA BADGER) FOR PROVIDING US WITH THIS TRIP DOWN MEMORY LANE.

Update for August 2010:
Mike/Poppa Badger can be reached at 416-251-9326 for the next while… after that… you will probably need a paddle and a canoe to find him.  Fiona hopes to get an interview with him, to post here, before the snow flies and after the cottage is closed for the season.  Email Poppa Badger or comment here if you have any messages or well wishes to send.  Thanks everyone, from Badger Paddles… for those who dig the water and Badger & Son… since 1945.