Pt 3 :: Making Room For Autism In Your Canoe – Visual First-Aid

Dig this: April 2nd is World Autism Awareness Day (WAAD) and April is also known to many as Autism Awareness Month.  This multiple part story/part guide, written in honour of The Six Degree Project (Autism Awareness Celebrity Campaign) and WAAD, is the tale (with tips) of how we got to the end of the portage with our son. With hopes to help raise awareness about autism and the extra challenge it brings to lives of many families, including ours; we also hope this Making Room For Autism In Your Canoe “series” helps to inspire other families to get out there and live their dreams as best as they are able – because even though, with autism, our lives are different – they shouldn’t be less. ~Fiona

Many people with autism learn and are able to understand their world better when they are given visual examples and verbal warnings of what may come. Visual aids can be like first-aid when anxiety is an issue. Similar to the idea of using the canoe seat as a visual marker in the canoe, we also relied on other visual aids as well. 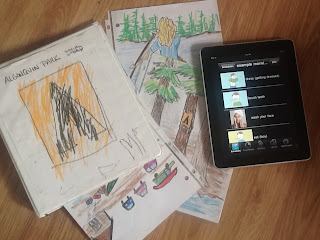 Our visual aids included information about where to go to the bathroom (i.e. the “Thrones” which are covered wooden boxes (with a opening for a toilet hole) placed over a dug hole that are used for going to the bathroom in Algonquin Park’s interior. Other parks, like Quetico, it is possible there will be no facilities available – where you are to dig a 6 inch hole in the ground instead). We had Makobe use the “Throne” when we were there as he has used an outhouse before. But as we know they aren’t pretty and usually present a very unpleasant odor, we also brought a back up toilet bucket for him to use in case he was unable to use the “Throne” due to sensory reasons and to prevent any health concerns or issues.
For our visual aids we used photos from our past trips (from before Makobe came into our lives), hand drawn pictures (including some of Makobe’s own art) and even borrowed a few from the internet too. At first we used paper visuals but now rely more on the iPad* for a quick catalog of visual aids on the go.
Another visual and verbal strategy is the “FIRST-THEN” concept. It is a strategy that we, like many other families, use to help Makobe cope in certain situations.  At first used in a visual aid, we now use it verbally( or sometimes bring out visual aids for newer concepts).  For a verbal example, we used “FIRST paddle to the campsite THEN swim in the lake.” Note: when we returned from our trip we updated Makobe’s Canoe Trip “picture story” with actual photos of Makobe and events that will be repeated on future trips as an updated visual aid and to help build his episodic memory. 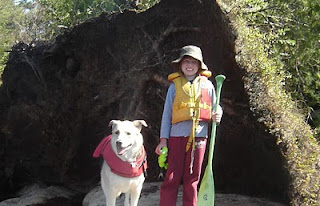 *More about the iPad in the outdoors coming in the next post.
Coming next: Practice Portaging & Gear