Pt 2 :: Making Room For Autism In Your Canoe – Paddling At Home

05 Apr Pt 2 :: Making Room For Autism In Your Canoe – Paddling At Home

Dig this: April 2nd is World Autism Awareness Day (WAAD) and April is also known to many as Autism Awareness Month.  This multiple part story/part guide, written in honour of The Six Degree Project (Autism Awareness Celebrity Campaign) and WAAD, is the tale (with tips) of how we got to the end of the portage with our son. With hopes to help raise awareness about autism and the extra challenge it brings to lives of many families, including ours; we also hope this Making Room For Autism In Your Canoe “series” helps to inspire other families to get out there and live their dreams as best as they are able – because even though, with autism, our lives are different – they shouldn’t be less. ~Fiona

The Journey Begins, Paddling at Home: 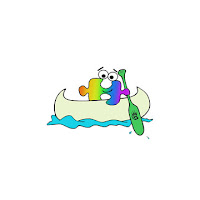 The first time we put Makobe in a canoe – he was moving everywhere and not happy with the demand to sit in one area for any period of time. So we started with pretending to canoe in our living room using our paddles and our ottoman. Then in a real canoe with very small 10 to 15 minute paddling trips at first, working up to longer trips until we were able to spend a few hours in a canoe with a bit of motivation (usually a swimming spot for Makobe), a number of favourite fidget toys, and some edible reinforcement (gluten-free gummy bears or crackers). Using the principles of ABA (Applied Behaviour Analysis), we would praise Makobe for the behaviours we wanted to see. “I like how nice you are sitting!” and “Good job sitting quietly!” helped to let him know what we wanted from him by giving attention to those things. We allowed stims** that did not affect the balance of the canoe. And we always tried to end the paddling experience on a positive note so that his last memory of canoeing with us would be a reinforcing one.
Later, once he had learned how to sit balanced nicely,  it became naturally reinforcing for Makobe to be out in the canoe, especially when he could drag his hand in the water as we paddled along. We also provided Makobe with a camp seat (a soft folding chair, also known as a stadium chair, that can be strapped to a canoe seat to keep it in place) so that he was aware visually where he was supposed to sit and to help maintain balance in the canoe. Mike and I have many years experience paddling in canoes and we both lean our boats when soloing so we are aware of a canoe’s balance points, therefore we are both comfortable with Makobe leaning over to trail his hand in the water as we paddle along. Although in some conditions like rough weather, large waves, or with a heavily loaded canoe, this wouldn’t be possible – that is where the small fidget toys take over. (Fidget toys can be anything small that a child favours to help keep their hands and minds occupied – for example, some of Makobe’s favourites are: Tangle Therapy, Spaghetti Balls, Stretchy Frogs, Koosh Balls, etc., see above photo)
We found the best place to sit Makobe (especially in the beginning) was within easy reach of the stern paddler. It is much easier to physically control a child just in front of you than if you had to reach around behind you in a canoe. (This is also an important consideration in a meltdown situation, but more on that in a bit.) Later, once Makobe began to understand the balance of the boat better and his concept of canoeing had matured a bit, we moved him more to the middle of the canoe to allow room for gear and more leg space.

When we all felt comfortable with the progress made, the next step was paddling with large amounts of gear in the canoe – as this affects the feel and balance of the canoe considerably. It also gets a bit more crowded once all the packs and drybags are filing up the space. Thus, it is important to make sure that the child is comfortable and has some room to move around and shift to get comfortable on a longer paddle. We found that Makobe sometimes preferred to be packed in a bit but usually would sit up on a small pack for part of the journey for a better view and position.