Posted at 15:07h in canoeing by Fiona Westner-Ramsay 5 Comments
0 Likes 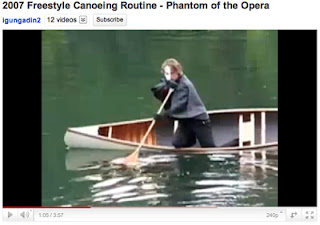 It is always funny to hear a first-time viewer of Freestyle Canoeing voice their concern that the paddler is going to fall out of the boat.  You may have even heard this reaction before if you have ever leaned your canoe over on it’s hull to solo paddle. It’s technical term is Freestyle Canoeing derived from it’s more basic sister, Canadian Style, but with a bit more flourish and a competitive aspect thrown in as well. And if it’s the first time you have ever witnessed this style of paddling, then you probably think the paddler is going to tip over and go for a swim at any moment.  But after a few minutes, you relax because you realize that the person is doing it, not only on purpose, but with such grace that you start to see the beauty in it.


According to FreeStyleCanoeing.Com:
“FreeStyle Canoeing is the “art and science” of quietwater paddling.
FreeStyle Canoeing emphasizes smooth, efficient flatwater paddling and precision boat control. FreeStyle can be applied to all canoeing situations.
Many FreeStylers paddle to music making an expressible, interpretive art form. FreeStyle paddling requires no special equipment other than a boat, a paddle, a life jacket, and in most cases a kneeling pad.”
But for those not familiar with this style of paddling, it can look a bit odd. Especially when some soft paddling music is thrown in with a matching themed costume!
“The concept of freestyle canoe has never entered my sphere of influence, and I’m still not sure I believe it even after watching these videos. It’s like a cross between canoeing, synchronized swimming, and Halloween, with the spirit of LARPing thrown in for good measure.”
That is how sports fan and writer , Jerod (of midwestsportsfans.com) describes Freestyle Canoeing after watching a few Youtube videos featuring some costumed paddlers. We don’t know about you, but no one in the Badger clan has ever paddled in costume before. Nor have we ever paddled anything but Canadian Style, ourselves. But it seems that these videos of outfitted paddlers are making their way into the mainstream media. And, because of the added costume element, some of them are pretty funny to a novel viewer… or, as Jerod the sports writer has put it, perhaps even: bizarre.
Yes, there are some hardcore canoe dance videos making their way into minds of the masses. Just yesterday, David Johnston of PaddlingInstructor.Com posted the news that Freestyle Canoeing was mentioned in a hilarious segment by Steven Colbert of the popular television show The Colbert Report. Mentioned… and giggled at. Because it seems that, while the art of Freestyle looks interesting enough, the act of paddling to music AND wearing a costume has brought it to the attention of many… and they think that it’s pretty funny. Especially the NFL sports fans who are looking for other forms of sports entertainment due to the current situation plaguing the NFL.
“Freestyle canoe? It made no sense, unless maybe as a description for a time when Li’l Wayne, Snoop Dogg, and Eminem were at a lake party and decided to take a canoe out for a while and do some rapping.”
While “Jerod”, the author of the quotes above and below, and others are no doubt amused by the costumes and music choices (a couple of the examples he uses is of the paddler dressed as a Pirate “dancing” to the theme song from the Pirates of the Caribbean and another is of a gentleman paddling to the tune of Chris DeBurgh’s “Lady in Red” in a green canoe), there is an obvious respect for the skills needed to lean a canoe and make it dance on the water…. As he goes on to qualify his words:
“With all that said, whether it’s bizarre to me or not, clearly these folks get a giant kick of it, so I say good for them. Just because some jackwagon blogger doesn’t understand anything about the sport and decides to be snarky about it doesn’t lessen its excitement or sheer awesomeness for the people who participate in it.
In fact, the more I write about this, the more I am finding my mind focus less on mocking the shocking images I just watched and more on trying to decide what song and costume I would choose for my freestyle canoe routine. First instinct: Can’t Help Falling In Love by UB40. It’s got “freestyle canoe” written all over it.”
So… have you ever freestyle paddled your canoe before? Was it to music? And if you were to embrace this sport, for how it has been portrayed in the mainstream media as of late, what special outfit would you paddle in?
For the full report from the Paddling Instructor website, see: http://www.paddlinginstructor.com/funny/freestyle-canoe-dance-s-biggest-fan-is-now-stephen-colbert-4299.html. For Jerod’s full article, see: http://www.midwestsportsfans.com/2011/06/looking-for-a-new-sport-fetish-consider-freestyle-canoeing-video/