For those who dig the Olympics!!!

02 Jan For those who dig the Olympics!!! 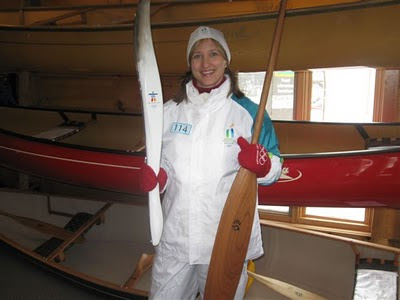 As most of you are aware, the Olympic Torch has been passing through Canadian towns and cities during the Canadian Olympic Torch Relay.  On Dec 30th, 2009, thanks to Stacey Collins Torch Bearer #114, Badger Paddles got to be indirectly part of Canada’s Olympic pride.
Stacey was selected by the Royal Bank of Canada as one of the 2010 Olympic torchbearers and took hold of the Olympic flame on Dec. 30 and ran part of its route through North Bay, Ontario. 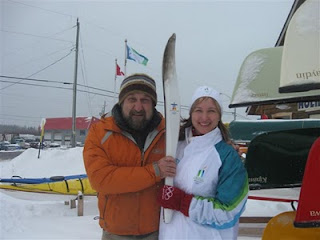 Bursting with Canadian pride (and her beautiful smile), Stacey stopped off at Swift Canoe & Kayak later to share her awe-inspiring experience.  “It really was AMAZING to be part of the 2010 torch run.  To hold up that flame knowing that it is a piece of history and the future all at the same time is very humbling.” Stacey reflected to Swift staff, Bobbo (see picture of Bobbo with Stacey & the torch).   Stacey and her family are an outdoorsy family, have expressed a love for canoeing, kayaking and “just being outside enjoying all that Canadian nature has to offer”.  To read more about Stacey’s thoughts on her Olympic experience read her interview in the Fort Frances Times Online.


Interestingly enough, as the article points out, by the time the torch arrives back on the West Coast for the lighting of the Olympic cauldron to mark the beginning of the 2010 Winter Games, the flame will have traveled 45,000 km across the country; visited more than 1,000 communities; and been carried by 12,000 torchbearers.


For more information about the Olympics and the Torch Relay, visit www.vancouver2010.com or Follow the torch here at CTV!!!


Thank you, Stacey, for sharing the Olympic Torch & your amazing experience with Swift and Badger!!!