FATPADDLER in Toronto – a Trip Report 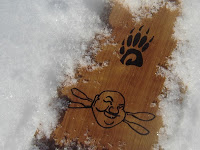 This past January, the HUGELY AWESOME, Sean Smith (a.k.a. the FATPADDLER) from Australia, ventured to the northern hemisphere for a short visit.  After a whirlwind of a trip to Toronto, Thunder Bay and then on to Chicago, before finally returning home just this past week, Sean reported a wonderful adventure on his website about some of his experiences in Canada. And while Fiona is usually the writer of Badger’s Blog, this special occasion inspired Mike to create a short trip report of his time spent with Sean (FATPADDLER) for the short 24 hour period that Sean was in Toronto.

Headed down to the city on a wintery Thursday night to meet this crazy Aussie who thought that it would be a good idea to leave his warm home to paddle in Canada in January. I didn’t want to miss this.

We all met up at the Bier Garden on King St. for food and spirits.  Sean turned out to be a great guy and a good rum drinker too.  The company was a lot of fun with many familiar faces around the table all ready and willing to share some Canadian hospitality and poutine with our Aussie guest.

The evening carried on, perhaps a little later than expected.  At the end we all headed our seperate ways with Alan, Sean and I  agreeing to meet for breakfast at 6:30 a.m. at the Queensway Diner before heading off to paddle at Cherry beach in the morning.

Everyone arrived on time for breakfast but with just a little less vigor and some noteably tired eyes. We took our time eating a big breakfast then headed over to Complete Paddler to get changed for the adventure.  By the time Sean the big Aussie had experienced climbing into a dry suit for the first time, I think he was already begining to ask himself why exactly it was that he wanted to do this.  Too late now. The plan was already in action.  We headed off for Cherry Beach.

When we arrived there where some pretty nice size rollers coming in to thin undercut ice on the beach.  We eventually found a safe albiet rough spot to get in the water, unloaded the Chestnut and Alan’s kayak and dropped the canoe in the slushy water.  I am not used to being the smaller paddler, but I definitely was this time, so I climbed into the bow and waited and braced while the giant rugby player plunked himself down in the stern seat.

At the end of this process we already had a fair bit of slushy water slopping around in the poor cedar canvas boat and the canvas was grinding on floating ice.  We stayed in long enough for a couple of pictures and quickly ended the shortest paddling adventure of my life.  It sure felt good getting into the warm truck afterwards and I couldn’t help feeling bad for the tired big guy sitting beside me.  He had been in Canada less than 24 hours, met a ton of people, partied downtown, seen most of the city in Alan’s jeep and paddled in lake Ontario.  Later that day he would hop on a plane to Thunder Bay where his Canadian experience would continue. And by the photo’s, blog posts, etc.. that I have seen would end up being no less eventfull.

Thanks for visiting Canada, Fat Paddler.  Next time you’ll have to come for longer so we don’t have to fit in all in to such a short time.


Written by Mike Ramsay for Badger Paddles… for those who dig the water.

So a big “fat” thanks to Mike for sharing his account of a winter’s paddling adventure with us all, and to Sean for being such a great sport and amazing advocate for the power of self-propulsion plus to Alan for making it all happen for Toronto!  Note: you can read Sean’s (a.k.a. FATPADDLER) account of his January paddling adventure in Lake Ontario here: http://fatpaddler.com/2011/01/canoe-paddling-in-toronto-with-badger-paddles/ Thanks also to our sponsors Algonquin Outfitters, Swift Canoe and others, who helped to celebrate Fat Paddler’s visit with us by way of a contest.
*In attendance for this photograph from L to R: Sammy & Jim of H2O Performance Paddles, Sean of FatPaddler.com, Mike of Badger Paddles, Kelly of The Complete Paddler, James and Dympna of LearnToKayak.Ca, and last… but not least… Alan… Team FatPaddler Rep, Sean’s Personal Assistant and Paddling Instructor.