Posted at 14:11h in Uncategorized by Fiona Westner-Ramsay 5 Comments
0 Likes 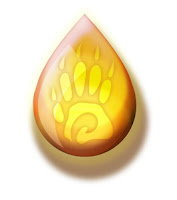 It’s no secret that the finishing industry is changing. Environmental concerns about the chemicals and toxins being used in finishing products are a real concern. VOC*** count and content is a real issue. Processes are evolving and new materials are being sought. Pretty soon, you may even be hard pressed to find varnish on store shelves that is NOT water-based.

As Badger is always concerned with the environmental and social impact that we have on the planet, last year we decided to get serious about our research and look for the most environmentally friendly and socially responsible oil finish that we could find in today’s modern world.  We really wanted to give our fellow paddlers a quality finishing product that was easy to use, non-toxic, environmentally safe (minimal effect on our rivers, lakes and oceans as well as safe for children), worldwide sustainability, and yet affordable too.  We asked around to find out about a few new products and were excited to try the recommended and novel (for us) oils like Orange and Hemp. But after researching and using various products and oils from Danish Oil, to Tung, to Teak, to Hemp to Orange Oil to Linseed; the decision was easy. Hemp Seed Oil was the clear winner, for a number of reasons. All of them good.

Environmentally speaking, when we looked at the available natural oils, we were blown away by the qualities of Hemp Seed Oil. Hemp Seed Oil is completely non-toxic, can be grown in almost any part of the world (without the need for large amounts of pesticides or any herbicides), is one of the fastest growing plants known to man, is food-safe, cleans up with soap and water, provides a smooth hard finish, no harsh fumes, darkens the wood while enhancing the grain patterns nicely, and there is no issue with getting it on your hands or skin, nor are there any respiratory effects associated with this product. Hemp can be grown for food, clothing or for oil, including fuel. It’s antimicrobial and anti fungal properties even help to prevent mold. 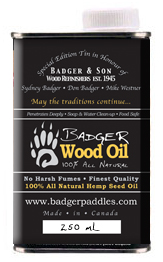 Tung and Teak oils are wonderful too, but we don’t grow Tung Trees (to harvest the nut for processing the oil) here in Canada, nor do we grow the hardwood known as Teak, therefore these oils (while excellent products) must be imported (from Asia/China) which greatly impacts the carbon footprint of these oils. We needed something closer to home. Also, these oils, when all natural, are considered non-toxic but you have to check your product packaging wisely as solvents and other chemicals are usually mixed with the Tung or Teak Oils to help then cure and dry faster. But this is usually referred to a “Tung Oil Finish” or “Teak Oil Finish” on the label. As a side note, some people also prefer a Tung Oil finish over Linseed Oil, as Linseed is known to darken the wood considerably. Also, another interesting fact about Tung Oil is that some people, who suffer from nut allergies, can have an allergic reaction to Tung Oil as the oil originates from an actual nut.

Raw Linseed Oil (from Flax), left as just natural, has the same qualities that raw Hemp Seed Oil has: it takes forever to dry properly. But unlike Boiled Linseed Oil – which is not really just boiled but has added toxic chemical solvents to help the oil dry and cure properly when applied to wood – Hemp Seed Oil only has to be put through an oxidization process to be able to harden when cured. Again, Hemp was the winner where the environment is concerned.

We also looked at the “environmentally friendly” Orange Oil, too, but eventually passed it over for the following reasons:

Orange oil, a natural oil and byproduct of orange juice production, proves that “natural” doesn’t always mean safe. Orange Oil is considered a very effective and potent pesticide for bugs but it doesn’t only kill them – it also melts the exoskeletons of insects! It is also considered to be an effective antiseptic and very aromatic and powerful solvent. And although thought to be relatively safe for contact with humans and pets (it’s biodegradable and has fairly low toxicity), you must be careful when using Orange Oil as it is a mild skin irritant (as it dissolves protective skin oils on humans too).

Orange Oil is known to also irritate the respiratory tract.  You should always wear gloves and insure there is adequate ventilation when using Orange Oil, just like Boiled Linseed Oil or any other oil mixed with solvents.  Orange Oil is also very flammable (much more so then Hemp Oil). There is even some evidence of carcinogenicity. One warning stipulated “Although Orange Oil is safer than nearly all other caustic, synthetic and toxic chemicals such as ammonia and bleach (chlorine) Orange Oil is not non-toxic, and should never be [sic] left where children may come into contact.”**

But we still wanted to test Orange Oil as a wood maintenance finish, regardless of Poppa Badger’s insistence that it was to be used only as a solvent, and even though the above qualities were a bit concerning (especially the fact that Orange Oil is highly acidic and can be a skin irritant). Also, besides the possible respiratory effects, another concern for us was it’s strong “smell” or “scent” as an attractant for animals. For paddlers who like to spend time in a wilderness situation, the last thing any of us need is an odour that will attract rodents, pests and other larger animals to our campsite.

Wanting to test the safety of bringing an mostly orange-oiled paddle into the bush, we set out a number of freshly oiled paddles last fall (overnight) in a wilderness area close to home. Every paddle finished in each oil, namely: Boiled Linseed, Tung, Teak, Hemp and Orange (specifically one was oiled with our Hemp Oil mixed with citrus solvents and one paddle was oiled with Hemp mixed with Japan Driers. Another two had the same mixtures of solvents to oil but instead of Hemp Seed Oil we used Tung. And then the same ratio repeated again, but with Orange Oil. The rest were oiled with the old standbys of Boiled Linseed, Tung Oil Finish and Teak).

Just as we had suspected, the orange-oiled paddles were the only paddles, to not only get knocked over by creatures in the night, but to also sustain some scratches (one paddle even sported a few teeth marks!). While there was lots of mouse signs left behind (meaning mouse scat) with the Orange-oiled paddles, we were also convinced a racoon had joined in the smelly goodness of orange fun. For this reason and the many reasons above, we decided that the Orange Oil was not the best maintenance oil for our paddles. However, when used as a solvent only, the Orange Oil did help a bit with the drying process and we were happy to find that it was a nice (less toxic then the usual solvents used) addition when used as a solvent only.

Interestingly, the rest of the paddles, including the paddles with the Hemp Oil were left untouched as well as the paddles with the mix of Hemp Seed Oil and Citrus* Solvents/Japan Driers. But the greatest thing about our research is that we were introduced to some really great products and methods of using them. We love the way all of the oils felt on the paddles, each bringing it’s own depth to the wood, but it was clear that many factors were not being met as we dictated in the beginning of our research. Orange oil was not safe enough as a maintenance oil, for our purposes, but was a clear winner as an added solvent for the purpose of drying the Hemp Oil a bit faster. We still use citrus solvents in our production at times, along with other Japan Driers and, as you are probably aware by now, we totally fell in love with the Hemp Seed Oil. It gave a great finish without any health or environmental concerns (unless orange oil is added as a solvent/drier – then extra precautions are needed).

Wanting to share this ecologically responsible and very environmentally friendly and safe maintenance oil with other paddlers, we made this 100% all Natural Hemp Seed Oil available to the general public. And because it is not considered a dangerous good – our Badger Wood Oil can be shipped anywhere in the world without special packaging or specific arrangements. You can also mix Hemp Seed Oil with a bit of Orange Oil/Citrus Solvents for a less harmful concoction then using chemical solvents usually found in oil finishes today). We are proud to stand behind our product – however, just remember – it’s not a fresh & flavourful hemp seed oil like that meant for cooking or salad dressings – but it is food safe. And if you happen to have some residual oil left over on your hands or paddle, this oil won’t melt the exoskeletons off of any creatures in or out of the water. In fact, it may even help attract a fish your way, so make sure you keep a rod in the water while you paddle… who knows, it may help you catch the big one!

Plus don’t forget, we still offer a standard finish too with a traditional mix of oil, various solvents and even some varnish properties (not unlike Danish Oil). So no matter your preference, whether a traditional oiled finish or an all natural oil, you know that Badger has your paddles covered, paws down!

This research and article was written in consultation with Poppa Badger/Mike Westner – former owner of Badger & Son (with over 45 years of experience working professionally with wood finishes) and present Wood Finishing teacher for the Toronto District School Board, Adult Education Programming.

*We only used a small ratio of Citrus Solvents to Hemp Seed Oil so as to not apply too heavy of a citrus scent to the paddle finish. If you add any solvents, Citrus or Japan Driers, please wear gloves. All citrus solvents and orange oils have a scent based on their limonene content. Limonene is what gives oranges and other citrus fruits their familiar aroma.
** Sources: www.orangeoil.net, Wikipedia, fabricart.wordpress.com/2011/04/14/how-toxic-is-orange-oil/
***Volatile Organic Compound