A Paddler’s Take on Christmas

14 Dec A Paddler’s Take on Christmas

While we all have memories of holidays past where we sing the traditional carols and read the traditional stories… this year we thought we would bring you the “Paddler’s Version” of some of the classic and more famous Christmas tales and tunes.  Versions of The Twelve Days of Christmas, Deck The Halls, and also The Night Before Christmas (by author Mike Ormsby) can be seen and below… feel free to share with your paddling friends….

And please know that we, at Badger, wish each and everyone of you a very happy holiday – Click here to see a special holiday message from Fiona and her family: A Special Message for Paddlers and Those Who Dig The Water.

Twas Canoeing Weeks Before Christmas:
Written by Mike Ormsby *
(based on the popular story “Twas The Night Before Christmas”)
Twas out paddling my favourite wood canvas canoe mere weeks before Christmas
The lake still being open with weather so balmy that no snow had yet come to pass

Still the water was more than quite frigid and so brisk was the early morning air,
Maybe too windy to be out in a canoe, but it wasn’t a gale force blow so I didn’t care.

I paddled over to the far side of the lake to where a river spilled in
Landing my canoe at the portage next to the whitewater roarin’.

I sat on a rock in the warming sun wearing layers of fleece under my old PFD,
Right next to the moving water, leaning my back up against an overhanging tree.

When further upstream there arose such a clash
I was startled, and slipped, and fell in with a splash.

My glasses went one way, my paddle went another.
Cold water went down my back….more than a bother.

The gleam of the sun on the river around,
Was lovely, but heck, I was going to drown!!

When what to my wondering eyes should appear?
One of those tupperware boats. Was my rescue near?

This bright red canoe had a jolly old fella, rather too fat to fit into a solo playboat,
With such a wide girth it was hard to imagine how his canoe could ever stay afloat

Even through the rapids he teetered, bouncing off each and every big rock.
This old guy looked to enough of his own big trouble, I thought with a shock.

But he slid in so slowly, so graceful, even stopping to surf the waves in one huge hole
As if none of the river’s challenges had ever required him to have to attempt a roll

And then he glided in softly, as smooth as can be,
Into the eddy, bothering nothing except maybe me.

And then in a twinkling he popped out of his craft
Like a cork from a bottle, I shouldn’t have laughed.

With flowing long hair and very scruffy beard, all of which were quite white
His unkempt appearance, complete with such frosted whiskers was really a sight.

His paddling jacket encircled his ample frame
With pockets full of gadgets, too many to name.

Then just as fast back out in his canoe, twirling his paddle high over the top of his head
He chose to surf the waves or play in an eddy rather than accept my praise or thanks instead

Yet he still hadn’t spoken a word but went straight to his fun,
And he portaged his canoe back for yet another river run.

But before putting in, he turned to me and said “I got something to tell ya”
“I’m Santa Claus….although I’m still mistaken for that Bill Mason fella.”

He sprang to his red tupperware boat, out into the current with a good pushing.
And then he shot downstream with a splash and nothing from rocks to cushion.

Now I’d have thought old St. Nick would be more of a traditionalist in his choice of boat
Something all wood or a canoe of wood and canvas with a shiny red painted coat

But I heard him exclaim as he drifted almost completely from sight.
“Always paddle safe, and remember to keep your canoe upright.

With global warming and polar ice caps beginning to melt, raising water levels so high
Soon a canoe could be the only answer to getting around rather than having to fly

Although I admit it won’t be so easy once the snow has started to fall
But for now let me just wish a Merry Christmas to all.”

And with that old St. Nick was very much gone
His concern about the environment was obviously quite strong

But I liked his choice of a canoe of any type as a mode of transportation
So I’ll just add Merry Christmas and Happy New Year to the whole paddling population!!!! 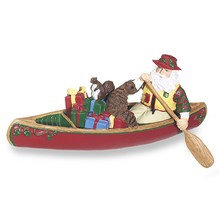 *Re-published here with the author’s permission.  First published on Reflections on the Outdoors Naturally blog here: http://reflectionsoutdoors.wordpress.com/2009/12/07/twas-canoeing-weeks-before-christmas/  Thanks to Mike for letting us add his wonderful “Paddler’s Version” of this Christmas classic to this post.