To Badger Or Not To Badger: That Is The Question

12 Aug To Badger Or Not To Badger: That Is The Question

Posted at 14:43h in Contests by Fiona Westner-Ramsay 1 Comment
0 Likes

Do you know the meaning and origin of the term “to badger”?

According to the New Oxford American Dictionary, the word is broken down like so:

badger |ˈbajər|
noun1 a heavily built omnivorous nocturnal mammal of the weasel family, typically having a gray and blackcoat. • Several genera and species in the family Mustelidae, in particular the Eurasian Meles meles, which has a white head with two black stripes, and the North American Taxidea taxus, with a white stripe on the head.
2 ( Badger) informal a native of Wisconsin.verb [ trans. ]ask (someone) repeatedly and annoyingly for something; pester : journalists badgered him about the deals |Tom had finally badgered her into going | [ trans. ] his daughter was always badgering him to let her join.ORIGIN early 16th cent.: perhaps from badge , with reference to its distinctive head markings. The verb sense (late 18th cent.) originates from the formerly popular sport of badger baiting.

Thus the term “badgering”is known as pestering and bothering.  But – these traits are not from the animal itself, but rather from the early sport of Badger Baiting whereas hunters would send dogs to harass badgers for entertainment and for blood sport.  Similar to dog fighting, badger baiting was forced combat between the badger and a succession of hounds.  Badger baiting, now thankfully illegal, would typically end with the death of the badger and most likely major injury to the dogs.


So it seems the origin of the verb sense of the word “badger”, descending from the formerly popular sport of badger baiting (late 18th century*), and “badgering” actually describes human behaviour towards the badger and not the actual animal’s behaviour towards us humans.  Interestingly the term “badgering”, thru this retired sport, became a popular term still used widely today – and it’s meaning isn’t very positive! 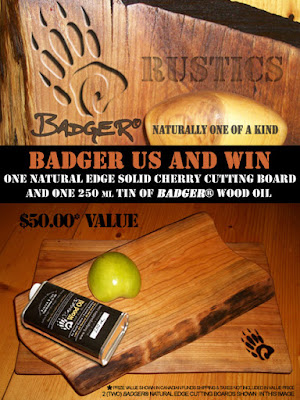 But we love when fans “badger” us with questions and comments on our Facebook page, Twitter or by email.  In fact, we love it so much that we are going to giveaway a Badger® Natural Edge Solid Cherry Cutting Board (with a 250 ml tin of our Badger® Wood Oil) to one lucky (some-what) random winner from our Facebook or Twitter followers. And, with the help of Poppa Badger, we will be picking the winner from all of the people who have engaged with us via our Facebook page and Twitter over the months of August & September! Which means the winner will have their natural edge cutting board and oil just in time for the Fall Harvest! UPDATE: THIS CONTEST IS NOW CLOSED!!! WINNER IS LAUREN BELL FROM ONTARIO, CANADA.

UPDATE: THIS CONTEST IS NOW CLOSED!!! WINNER IS LAUREN BELL FROM ONTARIO, CANADA. So what do you do to win? Just “like”, “comment” or “tag” us (or even yourself in any one of our images) via our Facebook Page and/or mention @BadgerPaddles in a Tweet over the months of August & September and we will pick one lucky person (on October 1, 2011) to win a Badger® Natural Edge Solid Cherry Cutting Board (with a 250 ml tin of our Badger® Wood Oil) Retail Value: $50.00. Mention and “badger” us as much as you want – there is no limit! And remember, we will be picking the winner out of those who are the most engaging and creative – and we are looking for quality over quantity.  So become a fan of Badger Paddles… for those who dig the water on Facebook today (or follow Fiona on Twitter) and start ‘badgering’ us for your chance to win!  Contest closes September 30, 2011 at Midnight (E.S.T.). Can you dig it?

Quick Contest Rules:
No purchase necessary. Prize(s) will be mailed via Canada Post with postage/shipping costs being covered – up to $20.00 CAD – if the cost of shipping (for example) outside of North America is greater then $20.00 CAD then the extra cost of shipping over and above the $20.00 CAD (to be covered by Badger®) will be paid for by the winner. If the winner does not wish to pay the extra costs incurred by shipping and declines the prize, then another winner will be chosen. Odds of winning are based on number of entries received and our judges’ opinion. Prize(s) include one Natural Edge Cherry Cutting Board by Badger® plus one 250 ml tin of Badger® Wood Oil – MSRP of $50.00 CAD value (taxes and shipping extra). Winner will be chosen based on quality of comments, likes and tweet replies. All decisions are final. Contest closes September 30, 2011 midnight (EST) with the winner to be announced shortly there after. Winners may have to answer a skill testing question before receiving their prize. Contest void where prohibited. For full contest rules or details, please email us.