Why Paddling Is Better Than Chocolate

17 Nov Why Paddling Is Better Than Chocolate

Posted at 21:53h in Uncategorized by Fiona Westner-Ramsay 1 Comment
0 Likes

Recently there has been some media attention given to the benefits of chocolate – some even comparing it to exercise! But we think paddling is better than chocolate… and have listed 10 reasons why. 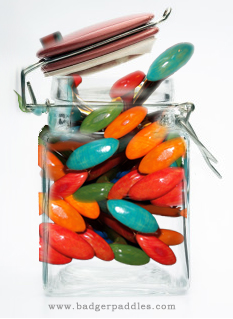 1. Paddling is free of caffeine, sugar, and trans fats.

The chocolate we tend to consume is full of sugar and trans fats, which we know is really bad for us. But chocolate also contains chemical substances from the same family as caffeine, which is found in coffee and tea. These chemicals are caffeine and theobromine.

This group of chemical substances is known to cause a number of effects such as imperfect balance, racing heart, insomnia and sleep disturbances, bedwetting, fatigue, obesity, dizziness, irritability, agitation, anxiety, acne, and more!

Where as paddling helps relieve stress and leads to greater physical fitness – it will even help you sleep better. Paddling does’t give you pimples either.

2. You can’t get fit by eating chocolate.

As a rule, chocolate candy bars tend to have a lot of sugar and fat which leads to weight gain. According to some, moving your boat at about 5 mph is going to use up about 400 calories per hour. Where as eating a chocolate bar can cause you to ingest over 500 calories!

3. You don’t have to ingest any insect parts to paddle

For part of the process necessary to produce chocolate, the cocoa beans must be left out to ferment. During this process it is possible for cancer causing agents to form, as well as for insects, rodents, and small animals to contaminate the fermenting cocoa beans. These contaminants remain in the finished product. The FDA allows up to 10 milligrams of animal excrement per pound, or up to 25 insect fragments per tablespoon of cocoa powder. EeeeeEEEEWW!

4. Too much paddling won’t make you fat.

Even with all the wonderful antioxidant effects of dark chocolate, recommendations are to only have one or two small squares a day. You can definitely enjoy paddling in your canoe a lot longer than it takes to finish off the recommended serving of dark chocolate. Plus the obvious – paddling burns calories while chocolate increases the amount of calories ingested.

5. Dogs can’t have chocolate but they can go paddling

It turns out that, for dogs, a chemical in chocolate called theobromine is actually toxic when it ingests between 100 and 150 milligrams per kilogram of body weight. So while you can’t share your chocolate with your pooch, you can share all your paddling adventures with your canine friend. Just remember your dog needs a PFD too!

Some people are allergic to cocoa, also known as chocolate, because it is a little too stimulating. The results are severe migraine headaches for those whose nerves are sensitive. So while you may become allergic to the material in your drysuit or the bee that stings you while you are out on the river – you can’t be allergic to the actual act of paddling. If you think you are – we have a term for it – we call it LAZY.

7. Chocolate and cacao isn’t made in North America but paddling stuff is.

Everyone talks about supporting the local trade and economy. Well, cacao (the raw ingredient in making our chocolate candy) is native to Central and South America and is grown commercially throughout the tropics. About 70% of the world’s cacao is grown in Africa. Where on the other hand, canoes, kayaks, SUPs, paddles and other gear are made in North America. And in the case of Badger Paddles… even resourced here.

8. There are no child slaves in the North American paddle sports industry.

When we first started this fun little project about how paddling is better than chocolate, we were not aware of this information. But apparently, almost half of the world’s cocoa beans (the raw material in chocolate) come from small, scattered farms along West Africa’s Ivory Coast. And on some of these farms, the hot, hard work of clearing the fields and harvesting the fruit is done by boys who were sold or tricked into slavery. Most of them are between the ages of 12 and 16. Some are as young as 9. A known problem, the Chocolate Manufacturers Association, a trade group for American chocolate makers, acknowledges that slaves are harvesting cocoa on some Ivory Coast farms. So while this piece was meant to be in fun, our research has made us aware of this very serious and horrible problem. Hmmm…  It will be hard to find “fair trade” chocolate in Muskoka – we better stick to paddling.

Apparently, chocolate is known to release endorphins like anandamide (the chemical that copies the relaxing effects of marijuana). But when the short-lived sugar rush is over, so is the effect of endorphins and you will be left feeling tired and worn out – also known as “crashing”. However paddling is exercise and exercise also releases endorphins for longer periods. Releasing fat from within the body, by way of exercise, helps to boost your mood as it is known to help to reduce stress and/or feelings of depression and even help with self-esteem.

10. You are much more likely to share your paddling equipment than chocolate.

Admit it. You are much more likely to lend your gear or share your time paddling with a friend then you are willing to share your chocolate bar! (So obviously paddling makes you a better person.)

BONUS REASON:
You are more likely to eat your chocolate bar indoors where paddling pretty much guarantees that you will get some fresh air! (Unless you are rolling in a pool somewhere – but us canoeists don’t really do that, do we?)

Note: Fiona really digs chocolate so this is not an attack on chocolate but an attempt at advocating for the power of self-propulsion in a humorous manner.